It's been a bit of a blurry couple of weeks here with the half term holidays, Easter and I've also been in hospital and unwell over the last week too so it's been pretty full on.

Now that I've finally had time to stop and breathe, I feel like I've ran a marathon.  I ache and I'm so over-tired from lack of sleep that I can't sleep if that makes sense?

The kids have had a great couple of weeks with cinema trips and animal park visits, they have got to spend a lot of time with their Nanny (grandmother not hired help) as she's not been at work which I know theyve really enjoyed. Theyve been to 3 Easter egg hunts in total with yesterday's having been set up by their auntie and uncle which they loved. We have enough chocolate to skink a small boat and I have no idea where we are going to keep it all.

On Monday eve i was taken to hospital via ambulance in a ridiculous amount of pain. (I know it sounds a tad extra but when we called 111 they insisted on sending one) after having blood tests and a scan it turns out I have to have an operation on my tummy which although it isn't ideal it could solve the problem I have of always feeling sick so swings and roundabouts i suppose. I'm on some medication until my operation so hopefully I can keep it under control.

The two oldest are back to school tomorrow and Kasper has his first day at pre school. I won't cry.....thats what I keep telling myself.   Little Marley won't know what to do with his personal space back and the lack of moaning and whingeing either for lunch at 9.30am or because one has told the other one to get lost.... After the holidays The house looks like it's been burgled at the moment so I guess I know what il be doing tomorrow.
at April 22, 2019

Thankfully we are now finally in July. I know it sounds stupid to "hate" particular months but id rather hide under a rock for the... 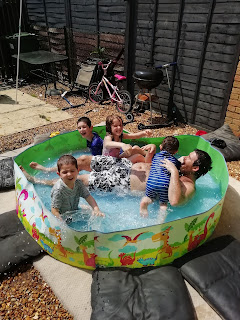